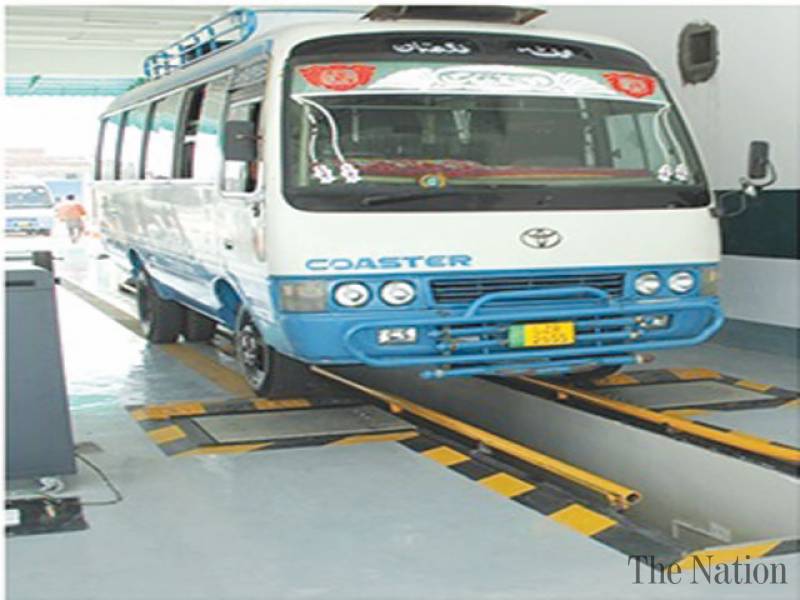 LAHORE – Abandoning the decades old transport inspection system, the Punjab government has made mandatory for 750,000 commercial vehicles in passenger and freight sector to pass fitness test of a Swedish firm to come on roads.
Opus Inspection, the Swedish firm, is establishing 39 Vehicle Inspection and Certification Stations (VICS) in all 36 districts of Punjab before the end 2016 with around Rs1.5 billion investment. Two stations have already been made operational in Green Town, Lahore, and Kala Shah Kaku, Sheikhupura.
According to the new system, buses, vans, cabs, trolleys and trucks will be issued VICS certificate after alignment inspection, brake inspection, visual inspection, vehicle suspension verification, headlight inspection, emission inspection and vehicle noise inspection.
The transport department has set Rs1,080 inspection fee for transport vehicle, Rs720 for each delivery van and motor cab, rickshaw and motorcycle rickshaw; whereas, the renewal fee after six months will be charged Rs540 for HTV and LTV, and Rs450 for delivery van, motor cabs and auto rickshaws.
Pakistan has one of the worst records in traffic accidents mostly blamed on faulty vehicles. In the recent past, the dilapidated condition of passenger vehicles caused horrific accidents in Kallar Kahar and Gujrat areas which claimed lives of more than 50 schoolchildren.
The existing system of inspection managed by provincial transport authority through motor vehicle examiner in every district roughly makes Rs150 million annually revenue for Punjab’s exchequer, and has been criticised for making no proper testing for the vehicles. It mostly allows unfit vehicles to ply on roads especially in rural areas, towns and small cities.
However, it is feared that Punjab’s transport will reduce to half if its fitness tests were made on international standard.
Transport officials claim the modern inspection method will be helpful in controlling the road accidents and entering this sector into a modern era.
“No public transport will be allowed to operate on roads without passing the seven inspections of international standard which aims to ensure road safety and minimize the number of accidents in Punjab,” Transport Secretary Capt (r) Javed Akbar told The Nation. He added that the enforcement staff of the transport department in every district will ensure every vehicle to get the VICS certificate.
Divided into three categories, the VICS includes “A-type stations” which will test LTV (Light Transport Vehicles) and HTV (Heavy Transport Vehicles). Two stations will be established in Lahore, while one each in Sheikhupra, Rawalpindi, Sargodha, Faisalabad, Gujranwala, DG Khan, Multan, Sahiwal and Bahawalpur.
The “B-type stations”, having single inspection lane, will serve only LTV and provide inspection facility in Rawalpindi, Jehlum, Attock and Sialkot.
The “C-type stations” are mobile units and serve both LTV and HTV at facility centres in Chakwal, Sheikhupura, Kasure, Nankana, Khanewal, Vehari, Lodhran, Pakpattan, Bhakkar, Mianwali, Okara, Khushab, Bhawalnagar, Rahim Yar Khan, Jhang, Chiniot, Toba Tek Singh, Gujrat, Narowal, Mandi Bahauddin, Hafizabad, Rajanpur, Muzaffargarh and Layyah.
Maximum inspection time for HTV, LTV and rickshaws will be 30 minutes, 20min and 15min respectively. Moreover, the owners/driver will take appointments through toll free numbers, SMS and website services.
Separate air-conditioned customer areas, help desk and waiting areas will also be established to provide good service to vehicle owner/driver during the inspection.
Opus Inspection Director Ahmad Shabir said the agreement was signed with Punjab government on BoT (Build, Operate and Transfer) basis. The company will make bi-annual inspection of a vehicle with different free structure for 30 years period, he added.
Ahmad further said 700 jobs of technical and non technical will be created and staff of Sweden and USA will provide training to local staff at all stations which will be completed in next six months across the province.
The provincial government https://www.viagrapascherfr.com/commander-du-viagra-forum/ has also provided land on lease for the VICS stations in all the cities.
This news was published in The Nation newspaper. Read complete newspaper of 26-Jul-2016 here